As a tracker of my mind’s wanderings, I’ve long carried the assumption that I’m a flighty sort, easily distracted but harboring the idea that I ought to buckle down to something; that doing so would be better. Though better WHAT, I’ve not been able to answer. This thought has teased me incessantly – that in order to feel fulfilled I must accomplish something.

In part because we’re taught early on that we can grow up to be anything (translate: you must grow up to be something), I always thought there was something unmanageable about my utter disregard for following one path to its logical end.

The logical end, of course is The End, and as that’s the case, perhaps it’s better to make the most of the trip. If it’s going to include a lot of odd side-trips, then so be it. But this devil-may-care attitude about my tendency to be “distracted” isn’t my de facto state. In fact I waffle a lot on whether or not I’m just unfocused and kind of lost.

Usually I harbor a kind of worry at the back of my mind that I’m not paying the right attention to whatever it is I’m SUPPOSED to be paying attention to. That I’m diffused and aimless and won’t amount to “much.”

In an effort to sort out judgments from characteristics, excuses from attempts to be optimally functional, I spend far too much time obsessing about what exactly is going on in my head.

Part of the process involves some map making, finding out that there are certain landmarks to the terrain of paying attention.

For example, there are moment-to-moment “distractions,” the kinds of things that make my mind wander away from something  I’m doing right as I’m doing it – something Robert at The Solitary Walker talked about the other day. There are day-to-day ones, the kind that derail a day’s plans with other urgent matters – or that postpone dinner because the mail was delivered; and ones that force-quit the projects of months with a new direction that seems more relevant to the trajectory that has taken priority.

I’m learning to take this in stride, as something my mind might require for happy functioning, though I’m trying to balance that notion with an awareness that it’s also possible to be easily waylaid by stalling. Accepting that I am attentive to many things and require maintenance of a high degree of mental stimulation (which equates with a limited tolerance of self-defined boredom) has a benefit of simply removing “one more thing to stress about” from my mental space. 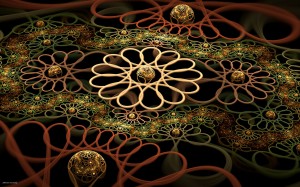 Is it better to accept one’s “flaky” nature and benefit by no longer stressing about it? Is it even flaky to be an explorer?

Consider Curtis Hillman’s take on it. “He once explained his penchant for reinventing himself in an interview. “I originally went to school for creative writing and film,” he said. “I then spent 10 years pursuing music, and, after failing at that, I did various random jobs. I got into design out of desperation — I didn’t want to wait tables or pound nails.””

Does trying new things, following one’s interests encourage unfinished business?  Isn’t that one of the fundamentals of trying to understand one’s life while engaged in the midst of it?  A lack of perspective makes it hard to view the trajectory.

One image that I thought was appropriate in this case is of an object in space that orbits more than one central point.

In similar fashion I tend to gravitate to subjects and projects that are within the pull of certain connected topics. This explains why I got caught up in the notion of an object with multiple orbits and tried to find a nice graphic to accompany the image, read up on the physics of orbits and browsed physics and astronomy sites to find one.

I didn’t have any luck and I’m not sure if that means I just didn’t look in the right places or if that’s an unrealistic metaphor. But it sent me off on a wild-image chase BECAUSE cosmology/astronomy is one of the central bodies I periodically swing past on my way to and from others. Anyway, the notion of strange orbits and the many models of orbit patterns I found are certainly tasty, and the irony that eccentricity is an orbital element isn’t lost on me.

Some orbits result in pretty things!

How about you? Do you oscillate between topics and interests? Careen madly through space? Are you absolutely mentally loyal to your work-in-progress and incapable of straying? How do you manage when your preferred working method is challenged?

I’m relieved at having discovered in the last year or two that I fit comfortably in the spectrum of people with many interests who are sometimes called scanners (Barbara Sher’s term), polymaths, people with “too many aptitudes,” multi-potentialites, etc.  It’s liberating to know I’m not really a flake though the challenge is figuring out how to work with it.

***
Image sources.  Fractal art (Superficial Dimensionality and The Fabric of Space) by Dan Kuzmenka who posts on DeviantArt where some of his work is available for download.  The GIF (or at least it’s supposed to be a GIF, I’m still tweaking) is from UC Santa Cruz professor emeritus, Michael Nauenberg.

1 thought on “Wandering. Aimless or Inspired?”