This is a post from 2012, and as I work to re-post-ulate this blog, I find it’s still relevant.

It has come to my attention (self-reflectively as is appropriate to post-modern solipsism) that I have nothing to add to the internet’s cache of information. I don’t know if that indicates my lack of social utility, a failure of creativity, an utter retro-square mindset (the opposite of which would be a rush to expose, through all electronic social networks just the things I wouldn’t share with my real life ones) or if it’s just wishy-washy dilly-dallying on my part, a fear to commit what it takes to stake my space, forge my “Brand.”  That and the overwhelming sense one can get by spending even a small amount of time online: it’s all already been said, why bother?

But I am bothered. I have things I want to share, conversations I’d like to be part of and they all get waylaid by all that’s involved with putting more words online.

market.  No invention, no novel idea (well, there is an idea for a novel, but I digress), no empirical data or dogmatic conviction. Just a life, just some thoughts, just a notion that blogging could be a viable way to connect with others.

It isn’t – or at least not in any life-changing, honest-to-goodness way. It’s illusory – I go away for months, nobody notices. A regular reader goes away for months, nobody notices. We can’t, we’re off to the next best greatest new thing to relieve us from the agony of boredom. We’re looking for the day’s True Truth, revealed in Twitter feeds, that will grant us momentary status in the nebulously networked, self-referencing universe of “oh, look at me!”

I wonder where this is heading, what’s the inevitable outcome of the requirement that we spin our lives to collect “friends,” that we push ourselves to be cutting edge, ahead of the curve. What are we sacrificing (what does the cutting edge cut away)?

Though they often leave me woozy, I like big questions and the possibilities they bring to our awareness. Mostly I don’t understand the universe – there’s consciousness (I think!), there’s matter, there’s energy, there’s emptiness and perception – all jumbled together with enough regularity to make us think we can get a grip on it and with enough anomaly that we sometimes get our convictions served back to us on a platter. 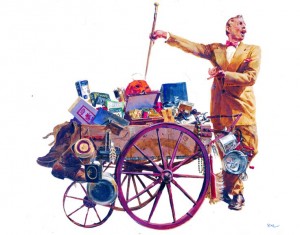 which the author reported on what he called “the decline effect.” By now Jonah Lehrer’s… shall we say, journalistic indiscretions, have become well known (see here and here if they’re not well known to you). But at the time, and being a slightly nerdy skeptic of “absolute” knowledge (as in, I like/benefit from but am untrained in science and I also accept other epistemologies), I fell for Lehrer’s notion that the universe might be throwing the “rules” of the game just ’cause it can, in all its way-out-there vastness. But just because an idea sounds good doesn’t make it valid. No brainer, right? Yet isn’t that a fundamental problem for humans?  All it takes is one glance at the varieties of philosophical ideas that have been promoted by one person or another through the millenia, all the styles of governing proposed, soteriological prescriptions offered, utopias envisioned to see that we love to take an idea and show all the ways the world proves it correct.*

Ironically, Lehrer made that same point in that same article, “Just because an idea is true doesn’t mean it can be proved. And just because an idea can be proved doesn’t mean it’s true.” I quote him here not to push home some sort of weird relativistic notion of truthfulness and provability (and that quote rightfully garnered a huge backlash); with remarkable accuracy we can explain and predict how matter behaves in this world because of information we have gathered with scientific inquiry – the scientific method is not really being challenged as Lehrer suggested.  Non-material reality, though, is of course, not so easy to pin down or interpret – and this is both because of the “problems” of subjectivity and wrapped around what subjectivity actually is.

This is a symptom of deep cultural uncertainty that leaves many scrambling for explanations or ways to cope.  For many, though, it’s been a springboard to a thriving career path that leads to

the dubious promised land of the convention hall, where the book, blog, TED talk, and article are merely delivery systems for a core commodity, the Insight.

New York Magazine’s Boris Kachka wrote a little over two weeks ago in an article on Lehrer’s downfall and the culture that created it, that “[t]he Insight”

is less of an idea than a conceit, a bit of alchemy that transforms minor studies into news, data into magic. Once the Insight is in place—Blink, Nudge, Free, The World Is Flat—the data becomes scaffolding. It can go in the book, along with any caveats, but it’s secondary. The purpose is not to substantiate but to enchant.

Lehrer, far from alone in his travels

was scrambling up the slippery slope to the TED-talk elite: authors and scientists for whom the book or the experiment is just part of a multimedia branding strategy.

Kachka posits that “he was less interested in wisdom than in seeming convincingly wise,” compelled and compounded in part by a culture in which writers (particularly staff writers for magazines which focus on the intersections of technology and science with social sciences and consciousness studies) “function as boldfaced brand experts in everything from economics to medicine to creativity.” [all emphasis mine]

I think that my self-fueled dilemma about blogging arises because the nature of the media is predicated on the existence of audience. I hope I’m not playing the role of the wallflower who claims that “dances are so stupid!” just because nobody asks her to dance, but that I’m honestly not sure how having an audience observe the inner workings of my mind affects said workings. Can I dance freely when I know others are or will be watching?  Do I really have to retire to a cave?

Oh, did I ever mention I overthink?

It’s hard not to when cases like John Locke (the contemporary writer who gained a following after receiving lots of positive book reviews, which he paid for) and Jonah Lehrer show up with some regularity, when ‘surface’ is the soup of the day and ‘substance’ is dropped from the menu.

Maybe I just have to have the attitude of a three year old – you know, if I close my eyes, nobody else is here.  Dear audience, forgive me. I know you exist (well, I take it on faith maybe), I just want to be careful… I don’t want to dance because somebody’s watching.

Meanwhile I’m off to update my SEO stuff.**

—–
*cynicism on this front brought to you today by the 2012 US presidential election campaigns.

** I take full responsibility for the irony of this conclusion.