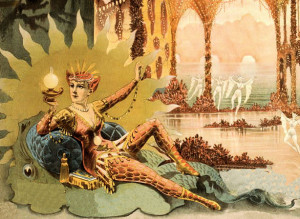 December 2015 Update: Here’s a post that is relevant, again. It’ll keep being relevant every time I step over a threshold and start over (again) on something. May beginnings go easily for you, as well.

I have this thing with beginnings, you see. Maybe you have it too.

It’s a kind of fear. It manifests as hesitation and avoidance. Sound familiar?

Does beginning sometimes seem like a threat even though it could equally be a possibility? Knowing that, does it still paralyze you?

This is familiar to most people who are willing to go outside their comfort zone. The old part of the brain that’s not very complex reacts, “Oh no! Danger! You’re about to embark on something that delays (uncertain) gratification and might kill you! Wouldn’t you rather have a snack?” As that part of the brain prefers comfort over “danger” we learn to heed the warning, thinking we’re smart self-preservationists, not realizing that “danger” is a code word. It’s not a code word for Tyrannosaurus Rex or Booby Traps on the Path to the Waterhole. “Danger” is code for:

From a perspective of the social and behavioral adaptations that could ensure biological survival, those generalized kinds of “dangers” can be scary. And they encompass everything from how we behave alone or in groups to what we decide to focus our attention on. Maybe there was a time when the necessity of toeing the tribal line and staying in your place were critical for the species’ survival. There’s not necessarily a huge place for artistic vision and challenging social norms when what really matters is if your group finds a big enough mammoth to tide you over for the winter.

This reaction isn’t only a matter of biological adaptation, but it is deeply embedded in the psyche. Given the universality of religious experience and the inherent human need for self-actualization, I’m sure early humans struggled with this too. Imagine an individual in a tribal society receiving a summons to serve the spirit world or carry medicine. Who wouldn’t backpedal and resist?

It’s the most powerful nothing I’ve ever encountered.

And it’s amazing that any of us can muster the power to overcome it. But we do, and we must.

I think one of the reasons Resistance (as Steven Pressfield names it) is such a potent enemy is because it can conveniently lose its memory.

We can’t; at least not without the help of head injury, dementia, or drugs. So what happens is that we incorrectly think, “Oh, that story that I’m working on, the one I started already? I’m not inspired today, why is that?” And then the likely next step is to analyze the day, “Well, I feel under the weather, that negative review threw my life’s purpose into a tailspin, I ran out of money and argued with my lover.” And so we have a false sense of continuum, assuming there must be a new problem with an assumed infinity of reasons and variables which prevent us from “continuing” without seeing that we merely have difficulty starting.

Meanwhile, the Resistance is saying, “What yesterday? Ha ha, I got you! Stopped you from starting TODAY.” It does not keep track of all the times you started before; it only cares whether or not it can stop you NOW.

We tend to only recognize the start-paralysis in front of the first blank pages and blank canvas then justify the rest of our excuse making as somehow fueled by a “legitimate reason,” but all of that just exists in the mind. Every moment is a new blank and it’s possible, without consistent effort, to be waylaid at every moment, just as it’s possible to know this and use that knowledge to make a break from paralysis.

One of my most important realizations has been the absolute necessity of recognizing that I have to begin (again) every single day (and often more than once a day), that the fear of beginning prevents me from walking through the door of my mind, prevents me from remembering the joy of just walking onward through my work once begun.

A beginning is not one monolithic starting point, not one famous moment after which everything comes easy.Every single moment is a beginning though Resistance tries to hide that while using it against us. Knowing this means that we can be slightly more prepared for the difficulty.

Paraphrasing (in italics) some wise thoughts about beginning, I’d like to suggest:

Begin at the beginning and go on (beginning) until you come to the end: (only) then stop. (Lewis Carroll)

Who has begun has half done. Have the courage to be wise. (times infinity)>  (Horace)

Everything has a beginning and that beginning is linked to something (that began) before it. (Mary Shelley)

It is easier to resist at the beginning than at the end (and remember everything is made completely of beginnings, so get to work). (Leonardo Da Vinci)